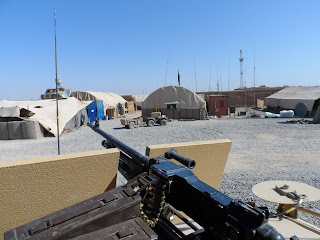 I've been in Afghan for two months now with another four to push. It's going fairly quickly but there are things in life that I miss; my fiancée, proper showers, decent food, and New Eden.

We have fairly good WiFi out there and in my downtime I've pretty much been scouring the Eve-O forums, Tusker forums and reading the usual blogs and whenever the router throws a fit I load up Pyfa and make all sorts of fits. Eve is the only MMO I play and apart from putting a few hours into the latest single-player RPG the only other game I play religiously is Battlefield 3 (soon to be 4 - roll on October!).

It was great to be able to keep up with fanfest and a lot of the content shown was awesome. I think I'm going to have a shock to the system when I get home in Autumn and find that the game has changed in many ways. Gate-fires look amazing, the new scanning system looks amazing and all of the other tweaks CCP are making look great. They really are focussing on Internet Space Ships which no one can find fault with.

Having spent a lot of time Pyfa-warrioring there are a lot of ships and fits I'm eager to try out when I finally undock in Hevrice again. I'm able to keep my skill queue going at the moment so Cable is going to have 6 months worth of unused skills at his disposal and a lot more ships opened up to him. I'm looking forward to getting back into my tried-and-tested Vengeance fit as it's a joy to fly and I've only ever really lost them to complete derps, like engaging Hawks under sentry guns or by getting blobbed.

My drone skills will have come a long way by the time I return so I plan on buying a few Myrm hulls to take out and do some solo pvp with. The dual-rep fit is well-known for being very hardy in PvP but there is a pretty solid 1100dps gank fit I'm eager to use.

I've also come up with an 105k EHP bait fit for the Gnosis which I hope to put to good use. With HG Slaves you get a whopping 150k EHP and seeing as everyone wants a Gnosis kill I think it could be used to get some good ganks.

I'm also looking at getting into Recons too. The Pilgrim looks like a fragile but very fun ship to fly. I remember warping into a FW plex a few months ago and having one uncloak on me. Fortunately another Tusker was in system and we succeeded in driving it away, though the kill would have been sweeter.

All in all, I'm looking forward to logging back in and getting my yarr on.
Posted by Cable Udan at 00:29 3 comments:

You Can Always Bet On Stupid

I've just submitted an anecdote of mine as a True Story for the competition that CCP are currently running. It goes back to August 2011, when I was still a kitten in the galaxy I've come to cherish.

Prior to becoming a Tusker but after my stint in RvB I was sort of at a loss of what to do. I knew I wanted to get into PvP in a big way but was still dipping my toes into the various aspects of Eve Online.

I would retell the tale here, and in fact I might do at some point as the True Stories format isn't really the way that I would go about setting the scene but I'll let you guys have a read about the storm I whipped up in a carebear corp before I settled down in lowsec for good.

"Immortals are never alien to one another."
- Homer, The Odyssey


I've found myself with a fair amount of free time recently and even though I can't actually play Eve I've been following the fanfest and reading the forums a lot in recent days. Doing so has lead to great withdrawal symptoms and I'm itching to get my yarr on. Unfortunately I won't be back in the UK until mid-September now which sucks a lot so I'll be whiling away my time making shit fits in Pyfa and perusing the forums.

I'm very much looking forward to the Odyssey, the summer expansion even though I'll be late to the party. The "new" scanner looks incredible, as do the revamped warp visuals; Eve is just getting more and more beautiful. On a side-note, if you haven't already done so post in this thread about CCP implementing high-res textures. They've allegedly said they'll do it if they garner enough want for it. And I do want!

Navy Battlecruisers seem pretty cool as well. My only bug bear is that the Fleet Issue Hurricane seems just like it's pre-nerf but with some more EHP. That sucks considering the additional price tag it will undoubtedly have. I just feel that the other Navy BCs have significant stat increases than the FI Cane, though that's probably down to my bias towards Winmatar.

The addition I'm looking forward to the most though is the Tags4Sec system. I think this will revitalize what many (and oft-time myself) think is a dying lowsec. No more will I have to trawl through FW plexes hoping that the Incursus inside isn't a stabbed farmer but instead can go back to belt pvp, best pvp! It'll be great to prey on carebears ratting to make moniez selling the tags and other pirates wanting the tags for themselves. I've been -10 or close enough for ages now and even though I don't feel restricted in my playstyle I'm very much looking forward to getting my sec up so I can antagonise carebears in highsec.

Odyssey is shaping up to be an excellent expansion.