Just a quick post to let any budding readers know I haven't abandoned CtBF (again), I'm just away with work for the next week and scarcely have any downtime to post but when I get a chance I'll throw something up.

Fly reckless o7
Posted by Cable Udan at 05:47 No comments:

February has been a busy month, my busiest yet in terms of kills.

In 19 days I've torn apart no less than 94 ships and capsules which is a personal best. Due to work commitments I won't be able to harass the space lanes until the beginning of March so this total will remain.

I've only conceded 13 losses as well, giving me a good ratio. Some of my losses were down to me either derping or going into fights I stood no chance of winning in the first place whereas others were me being outflown by my opponent. Still, I'll take 94/13 any day of the week!

Most of my kills have been solo, with a sprinkling of small gang work thrown in. Unfortunately I don't really get chance to take part in organised Tusker fleets due to my play times conflicting with the roam dates but I relish the chances to join an ad hoc gang and this month has seen a fair few.

The last time I did a "month in review" post was for December 2011, so it's been a while. In that time I like to think my solo PvP skills have come on in leaps and bounds. I'm a far more confident pilot, I've started branching into different ships and fighting styles and I'm a more well-rounded pirate.

Highlights from this month include this Loki kill. We'd been fighting some of his corp members in Hevrice for a while when the Loki appeared on scan. Once the other FW pilots had been popped and the local Tuskers were reshipping from T1 frigs the strategic cruiser jumped into Jov. At this point Kaal was calling out for some hero tackle and I traded him a dual-rep Incursus as he didn't have anything available. As the rest of our fleet waited tentatively in Hevrice, Kaal jumped into Jov to try and track this Loki down.

As is often the case in Eve, greed gets the better of people. The Loki engaged this Itty on the Jov -> Hev gate just as Kaal appeared on grid. He soon got point and the rest of us piled in and applied dee pee ess. Moments after the Loki popped one of his corpmates appeared on grid to rescue his unfortunate friend. As soon as he saw all the Tuskers he burnt away as fast as he could, but even the agile Atron cannot outrun heavy missiles.

Other highlights include the Sacrilige/Rapier/Thrasher multikill in Jov the other night. Various Tuskers spent about half an hour trying to pin a bunch of different ships down until we all pretty much settled on sitting at obvious celestials until something decided to have a go. Eventually the Sacrilige jumped Araziah at a planet which had the side-effect of all Tuskers in system piling in to help. Moments after I landed on grid the rapier appeared too so that got pointed too. Mid-fight a random Thrasher landed and laughed in local as he was asploded too.

I've also spent a bit of time this month solo gatecamping. Due to the fact I can't use T2 large guns (yet) my weapon of choice is a sebo'd arty Cane. I can still lock frigs up in less than two seconds which is usually enough. I only really tend to gatecamp when there's not much going on in the systems surrounding Hevrice and I don't have the energy/time to go for a solo roam. As I keep telling people on comms (who always laugh, I might add) that somewhere out there is an Itty V full of PLEX with my name written all over it. It might be tomorrow, it might be next year but one day it will appear on grid and I'll be ready to take my prize.

No such luck this month though but my best gatecamp kill goes to this chap who couldn't cloak in time to avoid my cannons. It seems the loot gods do no approve of gate camping either.

Until next time, fly reckless o7

The First Rule of Eve is...

This is a lesson that Nick Allreadydead learnt to his peril tonight.

I'll lay out the backstory; today I enrolled my alt into the Gallente Faction militia. Recently I've seen loads of cloaked and stabbed frigates running plexes (which is a bug bear of mine - wait out for that post!) and when questioned they say they're not in FW for the PvP but for the LP, which then gets turned into ISK.

Moving on though; my alt has been running plexes in my home system of Hevrice in relative safety. Due to the fact it's boring as hell watching a frigate orbit a button for 15 minutes I tend to alt+tab back onto Cable to do more interesting stuff. This lack of concentration has led to me losing a Rifter and a Merlin but they were essentially unfit anyway so it doesn't matter to me. Earlier on tonight Nick Allreadydead, a fellow Gallente militia pilot came into Hev and started running plexes. At first he came into the medium I was capping in a Thorax and like the nice guy I am I called him out on Tusker comms, as well as undocking Cable to get in on the kill.

When the three Tuskers landed on grid he immediately warped away. What followed next made me howl with laughter. My alt received a convo request from Nick who had warped to a safe. I accepted because I'm a rather polite chap and said hello. He asked if I spoke English, to which I confirmed. Then this jewel appeared on my screen:


[ 2013.02.15 21:14:52 ] Nick Allreadydead > Lets kill Cable Udan
﻿
I couldn't help giggling at this bizarre occurance and let my fellow Tuskers know what was going. Laughter erupted over comms and calls to get him back to the plex were issued. I asked Nick Allreadydead if we could kill him to which grimly replied "lets try". Now I'd left Cable at the medium plex just in case the Thorax came back of his own volition, and to give my alt some protection as local was getting a little busy. The Thorax soon appeared on my overview and he landed right on top of my Vengeance. I already had all my modules spinning up and ready to so I quickly targeted him and settled into orbit before calling out on comms for those interested to warp in.

My private convo tab then started flashing and I laughed as I read it aloud on comms.

At this point my fellow Tuskers had joined the fray and the Thorax was well and truely done for. We snagged his pod too but he had no implants. I imagine he was just another FW farmer created for the purpose of grinding LP to turn into ISK.

I might have felt bad about this pseudo-betrayal (I didn't actually agree to anything), but then I saw the cloak and warp stab and all sympathy vanished as quickly as Vitoc in a slave pen.

Remember the first rule of Eve, ladies and gentlemen. Never trust anyone you're not within driving distance of punching in the face.

Having decided to start posting again I wanted some fresh artwork for the banner. The old one was a pretty bad effort drawn by my own hand. My new shiny banner comes courtesy of Rixx Javix, a fellow Tusker with a penchant for graphic design. He was patient with my requests and the various edits that I wanted doing and I heartily recommend him for all your banner needs.

I also want to reboot the blog itself. Going over previous posts I started out writing simple battle reports from my early days a a pirate and learning the ropes of Eve PvP, and if that's all I continue to do I think it'll get boring. Nobody wants to constantly read about how I popped a bunch of newbies in Hevrice or how I went to Black Rise and killed some Faction Warfare people so I'm going to try and mix it up a little. Unfortunately I don't possess the in-depth knowledge of Azual so you won't catch me writing Know Your Enemy-esque articles but I'll be sure to provide some opinion pieces, mostly surrounding the area of piracy and PvP as well as highlights from particularly note-worthy and hilarious battles or just plain gfs.

In short stay tuned for more posts about me being a bad, tear extraction and some bloody good fights! 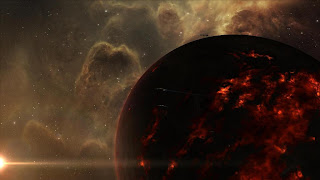 So ages ago I let this blog sort of die a cold. lonely death. That was bad of me and I should have posted saying that I wasn't going to bother anymore but I was lazy and didn't.

Anyway I'd like to say that I'm back! Over the past year or so I've had a couple of new pilots Eve mail me asking for advice on piracy and PvP because they've read my blog and think that such a life sounds fun and it's sort of been a bit of a kick up the arse to reboot this blog. At the time I did enjoy writing up my fights but my hectic RL life often made me choose between actually playing Eve or spending the time to write battle reports and posts up.

Things haven't really changed - I still have a hectic life but I have a renewed work ethic to keep this blog afloat, though I will say that at the end of March I'll be jetting off to the sunny land of Afghanistan to posting will cease for 6-7 months but will most definitely resume when I'm back in October.

Until then expect frequent updates about my (still bad) PvP exploits!