The Little Ship That Could 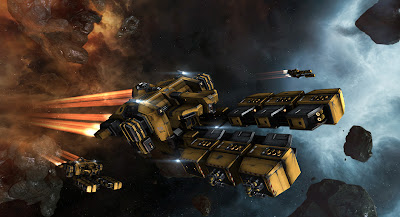 In between going on roams and popping people I tend to get distracted and either park on a gate in a sebo'd Cane or sit ship spinning. Last night I was watching some TV and decided to go out as bait in the newest mining frigate, the cute little Venture.

Because I abhor mining there were no lasers in sight and I'd fit up as follows:

This little baby can pump out almost 97dps and has a pretty impressive EHP of almost 5k, which isn't bad considering it's a mining frigate. I've seen some people fit blasters but to get them on they sacrifice the neut which is something I decided I wanted to keep.

Anyway, I warped to the top belt in Hevrice after renaming the ship to impersonate a positive sec status neutral in system. And then nothing...

Other Tuskers were getting into frig fights all over Hevrice and just as I was about to warp to station and reship to something combat-worthy Rixx Javix announced on comms that he'd tackled an Ishkur on the sun but his Algos was going down quickly. Other Tuskers responded to the call and I asked if I could bring a Venture onto the killmail. There were laughs and everyone was happy so I warped to Rixx at 0.

Moments before landing though the mighty Tusker announced that he had been asploded and that the Gallente assault ship would probably get away. I was the first to land on grid with the Ishkur and Rixx's pod and immediately overheated my scram as the enemy pilot tried to get away. No such luck for Dischordant though as my hero Venture held point long enough for Kaal Redrum and Rob Mason to arrive and dish out some real damage.

I escaped the fight in 43% structure and there was much hooting about the Venture dealing out 11% of the overall damage.

Gf's were given in local and I then docked up, leaving my Venture bloodied but satisfied.