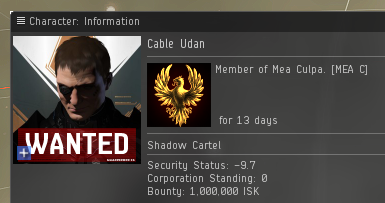 So I seem to have wound up joining Shadow Cartel. Yes I know, this has completely come from out of nowhere especially when you take into account two posts ago I was shilling for my own, newly created PvP corp.

Despite flying around New Eden solo most of the time it's still nice to have folks to chat to and enjoy the social side of Eve. In a one-man corp you don't really get much of that so when an opportunity to join Mea Culpa came up I took it. Since my return to Eve I've got to know most of the locals around Hevrice and I kept bumping into Max, one of the geezers from Mea Culpa and another SC pilot who keeps killing me in his Dragoon. Several ad hoc roams up and down the Black Rise pipe later (do not recommend - you always die when Max is in fleet) and I was basically in! There aren't too many pilots in the corp but I see that as a good thing - when you get to know basically everyone on TS/Discord a much more tight-knit group is formed rather than having randoms from a pool of a couple of hundred turn up for a fleet.

Shadow Cartel then, eh? I remember back in my days as a Tusker they were the big alliance a couple of doors down from Hevrice who liked to drop carriers on cruisers for a laugh. I'm told they (we?) still do that, which is mighty entertaining. I mean it would be if I regularly flew carriers. I do have a Panther sitting around gathering dust so that will hopefully be useful in the not too distant future.

Speaking of big(ger) ships, there are a bunch of doctrines that SC use, some of which are nice to have and others which are pretty essential to own. Some of them aren't cheap either so I thought I'd try and grow my liquid ISK by doing some carebearing (I hear the cool kids call it krabbing these days), because PvE in Eve is easy right?

There's no use hiding it so I'll just link it here. I welped a Loki on some random site, probably because I had no idea what I was doing. The first three battleship rats in the plex died easily enough to my HAM sandwich and I was barely taking any damage. Anyway after they exploded a whole bunch of other Mordu rats spawned and some of them webbed and scrammed me, which led to my beloved Loki with a bunch of killmarks on it also exploding. Something something hubris I guess. So yeah, I guess I'll go back to just taking other pilots modules after I've popped them. Might take me a bit longer to afford that Tempest Navy Issue though...

In other news I killed a Garmur today. That piece of information on its own isn't particularly noteworthy because lots of Garmurs are killed every day in Eve. Even the manner of how I killed it isn't really that interesting. On d-scan I saw a newbie in a Hurricane sat at an open FW plex. A few moments later I saw a Garmur on scan at the same plex. Using my incredibly impressive powers of deduction I identified the pilot, checked his recent Garmur fits on zkill - which were all semi-pimped LML kiters - and then fitted up my own Garmur with a scram and rockets.

I warped to the plex and due to Eve's rock-paper-scissors methodology I easily caught and killed the enemy Garmur. The loot fairy was not gracious and did not grant me the Republic Fleet long point but she did give me the B-type MWD which is better than nothing. I offered a gf in local and got one back and then the pilot said something in French which according to Google was slang for being irritated. Moments later my wallet flashed.

"for your skill". Had a good laugh at that. The irony of an LML-kiting Garmur pilot being salty because he got killed by an anti-kite fit Garmur is almost palpable.

Until next time, fly reckless