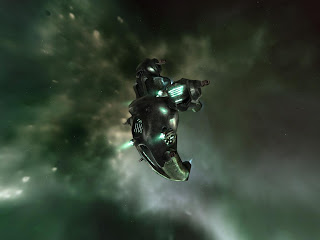 Yesterday I won a fight against an Arazu in my trusty Rifter. I don't have a killmail to show for it but the fact that he ended up burning away from me and dropping point is a win in my eyes.

I was in Vifrevaert, one of my many roam systems when a Caracal came up on scan. This kill was quite important to me as it would mark my second required above class kill to make me eligible to join the Tuskers. I was sat at the acceleration gate to a plex where the Caldari cruiser was but unfortunately he had moved on before I warped in. I should have really returned to a safe having found he'd left the plex but ran a few more scans where I was. Before long an Arazu popped up on overview about 20km away and instantly began yellow-boxing. As the flight of Warrior IIs approached me I thought I was doomed and at first tried to burn out of long point range. It soon became evident that this wasn't going to happen. Deciding to take the fight to the recon ship I burnt towards him while manually flying to keep my trans up, successfully avoiding the majority of damage from his railguns. At the same time I had his drones targetted and began taking them out one by one. I was quite surprised at how fragile they are with a web slowing them down.

Before long all the drones were spacedust but I was well into my armour too. This is where I got annoyed; having an afterburner meant that I couldn't get within range of the kiting Arazu who was obviously MWD fit. His railguns were doing next to no damage to me and my cap and armour were starting to replenish nicely. I tried all sorts of ways to get close to him but could never get under 17km which is a shame as I'd have loved an Arazu killmail in a frigate.

My opponent must have had the same thoughts going through his mind - he couldn't hit me and I couldn't get near him so he aimed his ship away from mine and began speeding off, dropping point as he did so. He offered a 'gf' which I returned. It was a good fight but one I wish I could have gotten a killmail for.
Posted by Cable Udan at 05:06