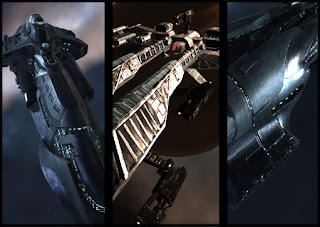 As I write this a large grin is slapped across my face. Tonight has seen me partake in three kills and one technical loss. Logging in after work I was pleased to see that over the night Minmatar Frigate V had finished and Assault Ships II was also trained, with III and IV being queued for the rest of the working week. I thought aloud to Tawa whether I should wait until I had AS trained to IV before undocking  in one. Tawa jovially replied that I should buy one and try not to fly it.

So I bought a Jaguar and after a quick scout of FHC decided on using the following fit:

For me it's a solid fit. The tank and resists are good and it has loads more EHP than I'm used to, having flown Rifters almost exclusively for the past few months. Originally I wanted to buy a Wolf for the extra gank but I was eventually swayed by the pure versatility of the Jag and have realised it is probably a better solo ship (I will try out Wolfs as well though).

As you'll know I fly with Tawa quite a lot and he's recently moved up to Sinq Laison on what he's dubbed a "holiday". Yesterday he bid me join him as he'd had some hilarious kills such as this Retriever mining in lowsec. Today I made my way up in a bid to test out my shiny new ship and to see what all the fuss was with the pilots in this region. After chasing a few shadows on our way up to Egg I quickly stumbled upon the calibre of pilot that Tawa was talking about. A Thorax was mining openly in a belt into a Sigil. I couldn't help but laugh at this foolishness and decided to teach this guy a lesson.

Warping into the belt at zero I'd pre-overloaded my afterburner and point knowing full well that my potential victim would want to make a quick getaway. Unfortunately I landed 24km too far and my prey warped off to his pre-aligned escape route, a station. I returned to a safe spot and my wingman casually mentioned that being a carebear the pilots greed would soon get the better of him and he'd be out again before long. Sure enough not even ten minutes later the Thorax and Sigil were back out, albeit at a different belt. Aligning to the cluster I hit warp and crossed my fingers hoping to land within scram range this time.

Not a lot to say here; his fit was pretty fail. There was no tank or gank. I would have thought that if someone wanted to mine in lowsec he'd at least fit some guns to try and ward off potential aggressors. I considered opting to use this kill as my second and last required above class kill for my Tuskers application. Though Tawa is on the killmail you can see he did zero damage so it was indeed a solo endeavour, however it's not worthy to be used as evidence of my PvP skills so I'm still searching for that last cruiser kill. I was glad that my Jaguar had bloodied it's teeth though.

While I popped the Thorax, Tawa attempted to tackle the Sigil but the Pew Pew gods were not favourable and it managed to escape. I tried snagging the miners pod but he spammed the warp button vigilantly and got away.

Nothing much occured for the next couple of hours apart from roaming the local systems in search of more customers. There were a few baitships out there (like 2008 pilots who don't rename their Punishers whilst sitting pretty on a belt for example) which I ignored. My next fight wasn't far around the corner though and I found myself chatting to someone in local about PvP. My soon-to-be-adversary enquired as to what ships I flew so I replied that I'm mainly a Rifter fanboy due to them being cheap, efficient and hella fun to fly. I agreed to a 1v1 against his Wolf so we fleeted up and he found me at a disposable safe.

I was a little nervous about this fight as my opponent was an early 2006 character and so would have an obvious advantage when it came to skillpoints and quite possibly pilot skill too. As has been told by many players though, SP isn't the be all and end all and I soon found that my autocannons were easily chewing through both the shield and armour of my enemy's assault frigate, much to my surprise. It really didn't take long until my Jag scored it's second kill. We both bade each other a 'gf' and I was then offered another 1v1 - but this time I'd be fighting a Vengeance. I heartily agreed, secretly thinking that I'd bagged myself another easy win.

Little did I know how wrong I was!

The Vengeance soon appeared on my overview and I went in for the kill. It's shield fell quite easily while the damage it was doing to my own was  quite low. Sensing another win I adjusted my orbit while keeping good control of my overheated modules. As soon as the Amarr AF went into armour my damage completely stopped. I was using Barrage and was completely unawares that I was hitting the highest resists of my opponent. As my shields began to get low I realised this was a fight I wasn't going to win and I decided to disengage rather than lose my ship. Manually piloting I pointed my ship away from the orbiting frigate and overheated my afterburner and web, hoping to keep him slowed down long enough for me to get out of scram range. Within moments I was free and I warped to another safe. After the fight we both talked about our fits and how I was using the wrong damage type etc. before we went our separate ways.

What have I taken away from that fight? I must learn T2 frigate resists! Due to the fact that I never engaged them in my trusty old Rifters I didn't pay any attention to the numbers behind Assault Frigates and it came back to bite me in the arse. I'd previously read the Know Your Enemy articles by Azual but hadn't bothered with the T2 ones. I'll be studying them hard and fast now so another incident like this doesn't happen again. It could have been a lot worse and I could have lost my ship but thanks to some good piloting and my opponent not noticing my actions I got away.

Cue some more roaming with not a lot of action. I was still searching for targets but wasn't interested in the (everpresent) tarps and baits. Towards the end of the evening though when I was thinking about going to bed until Tawa chimed in that he'd found a Megathron doing a mission in a lowsec pocket. This piqued my interest and I frequently asked for scanning updates as I made my way closer to the system in question. It wasn't long before Tawa's awesome probing skills found the battleship and we both warped to the acceleration gate. Announcing he had a point I jumped in not far behind my wingman.

The following fight didn't take long at all and many lolz were being had between Tawa and myself over fleet comms. A battleship was being taken down a guy in a Rifter and another in a Jag! The pilot opened a convo with Tawa to try and organise some form of ransom. Unfortunately for the pilot (but fortunately for me as I wanted the killmail) he could only offer a paltry 17mil and it was decided that his mighty Megathron would be reduced to spacejunk. As you can guess the battleship soon went pop. Once again the pilot got away in his pod which was a shame - were were going to try and get the 17mil ransom from his pod instead. The dropped modules from his wreck weren't too bad and as we speak they're being shipped off to a trade hub to be sold and the profits split.